A White Trio from Mount Horrocks Welcome to Spring and the release of a trio of whites from Mount Horrocks.

I am delighted to offer two wines from 2015 and one from 2014. The two 2015 whites: Mount Horrocks Cordon Cut and Mount Horrocks Watervale Riesling, are beautiful wines from the mild but unusual conditions of the 2015 season.

This season was unusual because temperatures in December and especially January were well below average. Days of mild sunny weather were broken only once in mid-January with a modest downpour, which freshened up the vines, kept them healthy and allowed the ripening process to power on. These conditions, combined with a very early budburst to start the season, resulted in the Mount Horrocks Watervale Riesling 2015 being hand-harvested on the earliest date in memory. The picking team, which was much larger than normal, sped through the work to get all the grapes in while they were in perfect condition, fresh, crisp and unblemished with lively varietal flavours.

The Mount Horrocks Cordon Cut 2015 was a similar story but of course hand-harvested much later in the season, yet not as late as normal. Warm weather, which followed the cutting of the canes to start the concentration process, resulted in the fruit raisioning evenly and relatively quickly, while the absence of rain meant the fruit stayed in pristine condition. This is not always the case! Conditions such as this offer great opportunity to make an exceptional Cordon Cut.

This wine reflects these conditions: beautifully concentrated yet subtle, even and fine, the sweetness barely noticeable due to the lingering flavours and impeccable balance.

The third wine is the Mount Horrocks Semillon 2014. Released each year after time in French oak and on yeast lees, both to add complexity and another dimension to the wine, this is a house style that I feel best reflects the quality and character of semillon from my vineyard at Watervale. It is by no means a common style, yet it’s one that has a small but strong following, and perhaps surprisingly, especially so in London restaurants where much of this particular wine is consumed.

As a trio of wines I see this as a very stylish release, in many ways the perfume and subtlety of each inviting you to taste again, explore further and enjoy!

Stephanie was asked what is it about vintage time that gets her excited?“I really enjoy vintage and the weeks leading up to picking: the time spent every morning in the vineyard, sampling and tasting the fruit is my favourite. The decision to pick is so important because I have such small quantities to work with and the fruit is so valuable, it is imperative I get it right.”
Once the decision is made, a team of pickers, this year up to 40 each day, hand-harvest the crop while it’s at that critical point of ripeness.
Every few hours, as the harvesting continues, a small truck shuttles the grapes to the winery to process the freshly picked fruit. Stephanie has for decades, found it unnecessary to fine any wine made, meaning all Mount Horrocks wines qualify for European organic wine status. They are also vegan and vegetarian friendly.

MOUNT HORROCKS CORDON CUT 2015
‘Cordon Cut’ refers to the unusual practice of cutting the canes allowing the grapes to raisin naturally on the vine.
The process naturally concentrates both flavour and sugar levels. Stephanie’s decision when to pick is based on both appearance and taste. Intimate knowledge of the process, rather than technical analysis, is critical.
The Mount Horrocks Cordon Cut 2015 was harvested from mid March to early April. A number of ‘passes’ were made, each fermented separately and fermentation halted when Stephanie determined the flavour to be right, with considerable residual sugar remaining.

The 2015 release remains limited, “It’s a little more restrained this year, more like the 2013, fresher and livelier” says Stephanie.

Juicy, zesty, lively pear and citrus fruit flavours tingle the palate in the most sensual manner – at once slippery, textural and yet delicate. Whilst rich through concentration, this is long and fine, with terrific acid balance.

Easy ten-plus years ahead but will be difficult to resist. 95 points. … this is one of the great Australian sweet rieslings, which brings a heady floral beauty to the aromatics and results in a captivating dessert drink that highlights the lime curd essences of the genre and gaining a spice twist with a mandarin like tang. Delicious, and not too heavy.

96 points. To obtain such complexity and richness and yet uphold fresh, tangy, energetic acidy is the key to the greatest sweet wines, and Stephanie has nailed it this vintage. …. It oozes delightful allure and complexity of all manner of stone fruits, tropical fruits, marmalade, pepper, fig and spice. The finish lingers very long carried by beautifully seamless acid flow and impeccable balanced sweetness. Benchmark Australian dessert wine. Drink 2014-2024

2015 WATERVALE RIESLING
The Mount Horrocks Watervale Riesling vineyard, in the north eastern corner of this famous Clare Valley subregion, is planted on the very edge of the highly rized red soil over limestone. Surrounded completely by open land where cattle graze, its relative isolation benefits the strict application of organic practices which Stephanie has adopted.

“I really enjoy vintage and the weeks leading up to picking” says Stephanie, “the time spent every morning in the vineyard, sampling and tasting the fruit is my favourite. The decision to pick is so important because I have such small quantities to work with and its so valuable,it is imperative I get it right.”

Once the decision is made, a team of 25 pickers hand harvest the crop within two days, while it’s at that critical point of ripeness.

Every few hours, as the harvesting continues, a small truck shuttles the grapes to the winery to process the freshly picked fruit. After removal of stalks and gentle crushing, the free-run juice is separated – the only component used for Mount Horrocks wines. With exclusively free run juice used Stephanie has, for decades, found it unnecessary to fine any wine made, meaning all of Stephanie’s wines not only qualify for European organic wine status, they are also vegan and vegetarian friendly.

Mount Horrocks 2015 wines are very fine and elegant, reflecting the year and an outstanding harvest with all natural acidity and high baume.

An outstanding limited release Riesling of the highest echelon, regularly acknowledged among the finest in Australia and admired around the world.

95 Points. It’s pretty simple. If you like young Clare Valley Riesling, you will love this release. It’s a quality wine but more so it’s a charming one. It is because it doesn’t try too hard/it is what it is. It’s pure and citrussy with sherbet and bath salt/talc characters. It has finesse. It doesn’t dart through the palate, but it moves with certainty, and inevitability, towards a long finish. It’s Riesling without a cloud in its sky
Campbell Mattison, www.winefront.com, August 19th 2015

95 points. … this is one of the great Australian sweet rieslings, which brings a heady floral beauty to the aromatics and results in a captivating dessert drink that highlights the lime curd essences of the genre and gaining a spice twist with a mandarin like tang. Delicious, and not too heavy.
Tony Love – Top 100 Wines, Adelaide Advertiser – 25th July 2015

Here’s another excellent vintage for this single vineyard expression of the Clare Valley’s Watervale from winemaker Stephanie Toole. There’s delicacy and restraint with lemon blossom aromatics, fresh and pure lime juice and lemongrass flavours that flow seamless. It’s balanced and so there’s a softness in the mid-palate before finishing with restrained power and unrestrained intensity: dry, crisp and zingy.

95 Points. A really alluring Riesling. Beautifully fresh and delightfully aromatic. Spices, gentle citrus notes. The nose has a lovely character, which reminds me of a dusting of icing sugar, if childhood memories serve. It is clean, fresh, balanced and with revitalising acidity. Nice length. A Joy.

2014 WATERVALE SEMILLON
Mount Horrocks owner-winemaker Stephanie Toole’s four acre plot of Semillon vines were in ideal condition in February 2014, having enjoyed an excellent spring-summer growing season. The grapes had ripened steadily and Stephanie’s twice weekly vineyard visit, to taste the fruit and collect samples for lab analysis, led her to the decision to harvest in the final week of the month.

The fruit is hand-picked in the early hours of the day and transferred immediately to the winery where it is promptly crushed and destemmed, then very gently pressed. The free-run juice is isolated and settled in tank prior to a natural fermentation in French oak barriques, one third of which new.

Stephanie stirs the wine in each barrel regularly during the eight month maturation in cellar. Disturbing the settled lees encourages them to impart more flavour and importantly, texture to the wine, an oft-noted feature of Mount Horrocks Semillon and an aspect that sets it apart, for example, from the Semillons of the Hunter Valley, which are for the most part unoaked, requiring a considerable amount of time in bottle to build similar palate richness.

In September Stephanie takes a sample from each of the barrels and over a series of days, tastes and re-tastes to plan the final blend. Whilst this single vineyard wine is made in a single batch, until the final blend of barrels is complete, it’s essentially 16 individual wines, each having fermented separately and tasting ever so slightly different. For this reason, a sample is taken from each barrel and over a series of days Stephanie tastes and re-tatses to plan the final blend.

Blending can be where the real art of the winemaker kicks in. . Stephanie tastes with a small team at the winery, each of whom provide valuable input. However, ultimately the final blend is her decision.

Once assembled, the wine is bottled without fining and returned to the cellar for a further nine months ageing prior to release.
Very pale lemon-straw.
Lemon curd, vanilla pod spice and ripe apple. Beautifully textured and layered wine, delicious apple, apricot and pear fruit combined with excellent oak and barrel ferment character, giving richness and length. Has a satisfying roundness that leaves you wanting more.
Enjoy now or over 6-8 years from the cellar.

PRAISE FOR THE 2013
…hints of lemon cream and toasty oak – but it’s wonderfully tangy, balanced and refreshing in the mouth. Good now but better with a few years in the cellar: I opened a 2007 Mount Horrocks sem after I tried this and it tasted gorgeous with roast chook and all the trimmings.

93 points. An impressively pale straw green hue for a 100 percent barrel-fermented Semillon, this is an impeccably balanced assemblage of lemon zest and crunchy pear with the toasty spice of barrel fermentation, holding impressive line and focus from the start to finish.

JAMES HALLIDAY WINE COMPANION 2016
2014 Riesling – 95 Points
Bright straw-green; the vintage caused issues for Riesling here and there in the Clare Valley, but not for this lovely wine; citrus blossom and crushed leaf aromas lead into a relatively full-flavoured palate, which doesn’t lose focus on the finish, sustained by crisp minerally/citrussy acidity. Drink By 2024

2013 Semillon – 94 points
In time-honoured fashion, 100% barrel-fermented, but the French oak is not the least overt, sinuously interwoven with ripe Meyer lemon and stone fruit flavours. A classic each-way proposition, now or much later. Drink to 2020

…matured in French barriques (40% new) for 18 months. Marries power with finesse, its black fruits filling the medium to full bodied palate, but does so with guile; it has outstanding line and length, and will be very long lived, yet allow access at any point along the journey. Drink to 2035

2012 Nero d’Avola – 94 points
…singularly intense, with spice, briar and rose hip tumbling around the palate, the intensity reflected in both the fruit and the cleansing acidity and finish. Drink to 2020. 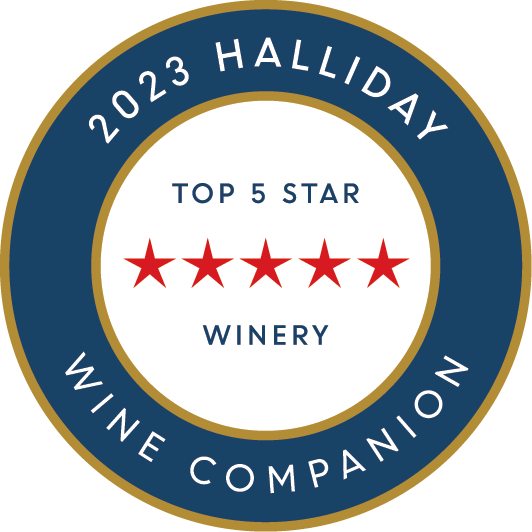